“This is the Remiix” is a concept for a fictitious gamer and streamer. It was inspired by the evolution of gaming and streaming over the last 15 years. The materials created for this project include branding, videos & a website. Paying homage to the World of Warcraft Priest I’ve played for over 10 years.

I’ve loved this game for over 10 years, it’s adjusted the course of my life completely, introduced me to my husband, and changed my outlook on life. It’s meant as a work of love for my younger self, that things can get better.

Activision, the company behind World of Warcraft, is going through some things right now. I hope it’s obvious that this is rather confrontation for me because it’s so personal. Which is why I have decided to wait for the process of the trial to proceed, and see where I am then.

I am incredibly proud of the people who spoke up, cause if what they’re saying is true, and the investigation is sound, that sounds incredibly hard. I cannot even begin to imagine what that’s like.

I may end up abandoning my subscriptions completely, but I just cannot say at this time. That said, most of This is the Remiix was made before any of this was public, and I knew nothing about it.

With the popularity of competitive gaming and streaming, I thought it could be fun to explore an alternative reality. In 2010 I was playing at a high level in my game of choice, and had a semi-successful blog along side it.

About ten years ago I raided pretty high level, my guild Lotto was ranked 77th in the world, and I was the best geared priest on Twisting Nether. My blog was very small, but I loved doing it.

I sometimes look back and wonder, the path my life could have gone if I had made different choices. Not to live in regret, but to imagine alternate realities, and apply what I’ve learned, and how the world has changed.

Nowadays, people aren’t just anonymous gamers, many of us have made a surprise appearance in someone else’s stream, or hosted our own. Facilitated by Discord, YouTube and Twitch, big and small communities are connected through gaming in growing numbers.

I wanted to explore what that looks like, what the gaming and streaming community become after gamer-gate, and visualize that into something I’ve called “This is the Remiix”.

If I had followed the path of gamer and streamer, who would that girl be?

Some streamers are smart enough to have their own websites, making themselves less dependent on platforms such as Twitch, Youtube and Mixer. I wanted to give Remiix as space like this as well, and created a simple landing page. One of the fun things I did for this project is create rich media in the form of gifs and videos. My plan was to create ambient/ASMR videos from different zones in World of Warcraft, focusing on what you hear, with the context of where you would hear it.

There are some amazing compositions and ambient sounds in the game, so there would be plenty of material to choose from. ASMR had a really big community on Reddit at the time, and was highly watched content on YouTube and Twitch.

This is a journey into the gaming community. How people connect, how they share information and the ways they work together. In this I draw from my experience as a member of Warcraft guilds, creating events, and leading groups of 10-30 people.

View also the demo landing page created for this project. Concept website demo for This is the Remiix, a brand concept for a streamer and gamer in World of Warcraft. The idea was to create ambient/ASMR videos from different zones in World of Warcraft, focusing on what you hear, with the context of where you would hear it. This is the Remiix is a fictitious gamer and streamer brand, for which I created hardware illustrations for use on YouTube, Twitch and social media. Completionist Scarab Lord, the Insane, Madlax was the 4th players in the world to complete all Somewhere in Another Multiverse

Another Multiverse was inspired by NASA’s new gigantic space telescope, it’s a simple representation of the telescope, and a multiverse around it. 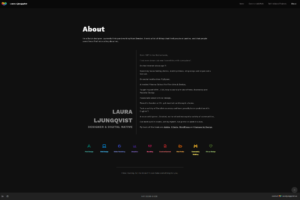 The idea behind the design for the Laura Ljungqvist website evolved from my work, and the experience they gave me.